Following a year of developing the workshop into a fully equipped making space and completing several commissions, I now feel ready to offer my design and making services to the world.

I hope to be adding links to the usual social media sites and updating with work, news and images as they are generated on a regular basis. Do check out the work here and if you would like to know more on items for sale and commission opportunities please contact Doug Nicholson at doug@externalcombustion.com or mobile 07966 179040

A sonification installation of visceral beauty, power and rhythm.

This is an idea I have wanted to do for some time and was realised as an ‘Enchanted Parks’, Gateshead commission at the end of 2014 with great response.

This monumental piece of laboratory equipment represents a curved slice of the sun animated with flame. Adapted for modern technology,    Helios can be controlled directly by data supplied by NASA or from drum and midi programs to produce constantly evolving beat patterns and loops. Coronal mass ejections thump and screech as filigrees of flame roll and pulse across a twenty metre arc of steel apparatus.

Helios consist of over 50 individual propane gas flame heads of varying sizes and effect, is capable of running constantly for hours and is our imposing and exciting new work for 2015.

Now for a bit of geek stuff:

I have designed a sub program in MAX to run along side Ableton Live to decode data from NASA or any other audio or analogue input to create MIDI notes, which then control the rig. I can now play this flaming monster like a delicate instrument and open up the controls to the audience through Wii, XBOX 360 and iPAD.

Many thanks to all of you who attended the first Prometheus Garden performance. Despite a limited budget and rehearsal time and the help of fantastic weather the show was a great success with many aspects of the production identified for further development and tweaking. We have had enthusiastic expressions of interest for next years festival season and work will start early next year to improve, change and finesse the project.

Prometheus was an experiment in what could be achieved by combining the many activities of both myself, the company team and collaboration with Slung Low. A very worth while project was realized, with a great opportunity to go further and attract attention from festivals and event. A lot of thanks goes to the Ex Com team, Slung Low, Elsecar Heritage Railway , Barnsley Council, Raise the Roof, 52nd Street and the Arts Council for their dedication, hard work and belief in the original idea.

Attached are some site preparation and show shots. I will be posting further images and video of the show as soon as they are back to us and will produce a touring information package in December.

The show is finally complete. All music, lighting, Midi, pyrotechnic and performer cues are finished and the sculptures and set are painted and tested. We are now looking forward to good weather and a big audience for this unique and exciting premiere performance.

A simple story of one man’s struggle to fill a world of silence and darkness; a story of how far someone will go in order to avoid being alone.
Join us in a world of huge metal beasts, where flames shoot towards the moon and dark, industrial soundscapes echo in your ears.
Prometheus’ Garden is the pinnacle of External Combustion’s decades of experience creating spectacles. It’s years and years of skill concentrated into the singular endeavour of telling you a story about a man who imagined not being alone. And the consequences for all of us in his vision. 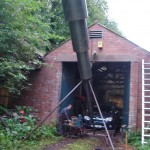 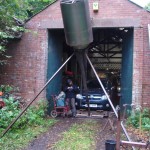 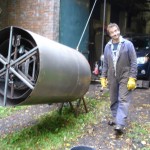 Prometheus Garden showcase invites are now going out. If you would like to attend, do drop us a line at info@externalcombustion.com by 1.10.12.

I am very pleased to announce that we were successful in getting support from the Arts Council for the development of Prometheus. The mechanical set builds are well under way and should be completed for the next phase of the projects development in August. Pictures to follow and a bit more detail when I get the chance.

In the workshops with one of the almost finished homunculi.

Hello and welcome to my first post. At this point I would like to outline what I think this blog is for and the motivation for having one connected to our new and shiny External Combustion web site (many thanks to Nik at Remix for such a fantastic job!).

The blog gives me the opportunity to present my personal side projects, which do not generally feature in the show and fireworks display productions of the company. However, I am now becoming much more interested in creating new performances that will bring in my own machine sculpture and video work, with an eye to developing shows that are less concerned with very large scale spectacle and more to do with visual detail, nuance and intimacy for an audience.

The first project to combine the infrastructure of External Combustion and my work is ‘Prometheus’ Garden’, which I am delighted to announce has the venue, date and generous funding in kind and real money from Barnsley Culture Team. More on this to follow, after we complete some indoor pyro gigs and a big roof top pyromusical at the end of the month.